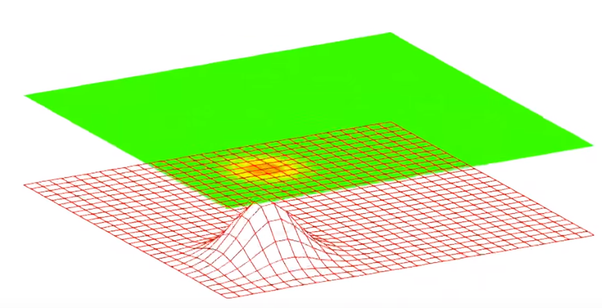 The accompanying video demonstrates how an electron can be both a particle and a wave. (The video has two unfortunate errors in it, which I’ll point out.) The video shows how different kinds of objects, including an electron, act when they speed towards a barrier perforated by two slits. Then, it shows the pattern the objects form on a detection screen after passing through the slits in the barrier. This is the famous Double Slit Experiment. Here’s what’s going on in this video, step by step:

“Particle” shows ordinary particles, let’s say pebbles. Particles are separate individual little things that at any one moment are in a tiny, very localized position. So, individual pebbles shoot through one slit or the other. Then, the pebbles hit the detection screen.

“Wave,” in the video, shows an ordinary wave, let’s say a water wave. The water wave is spread out, so it goes through both slits. On the far side of the barrier, two waves emerge, one from each slit. The two waves interfere with each other. They form the crisscross pattern of ripples that we see if we throw two stones into a pond. This crisscross

pattern of ripples hits the detection screen and forms a striped pattern.

Figure (2) clearly shows how a water wave creates the crisscross “interference pattern” and marks the detection screen with a striped pattern. This is just like in the video. This striping is the signature pattern of waves interacting. When physicists see this pattern, they think “waves.”

To summarize, here are the differences from particle behavior: the wave is spread-out; goes through both slits, not just one or the other; forms two interacting waves on the far side of the barrier; and forms a striped pattern on the detection screen.

“Quantum object” shows a subatomic particle, for example, our electron. It doesn’t act at all like an ordinary particle such as a pebble. At first, it acts more like a wave. It’s spread out and goes through both slits. It emerges as two different waves on the far side of the barrier, and these interfere with each other. The two waves form the same crisscross pattern that ordinary waves form.

The Quantum Wave vs. Ordinary Wave

Here’s a brief listing of differences between a quantum wave and a classical wave (for more detail see the article in this encyclopedia on wave):

The ability of electrons and other quantum particles to act like both a wave and a particle is called “wave-particle duality.” I’ve found that the Transactional Interpretation of quantum mechanics is able to make some sense of wave-particle duality.* This interpretation proposes that when the electron is in its wave-like state, it is not in our physical reality. That is, it’s not in spacetime but is in an underlying level of reality that we can call “Quantumland.” This level of reality, while not observable by us, is lawful in that it follows the laws of quantum mechanics. It underlies and determines the probabilities of what occurs in our spacetime.

How does the electron enter our physical reality? It interacts with something physical that is made up of lots of particles—a “macroscopic object” like a detection screen. Upon interacting with the screen, it’s suddenly a particle. This is called the “collapse of the wave function.” Since, the electron always becomes a particle as soon as it interacts with a macroscopic object, we can never observe it in its wavy state. We’re like King Midas. He could never feel his daughter’s soft hand because she turns to gold the moment that he touches her. We can never observe the wavy state of an electron because the wave function collapses to a particle when we interact with it sufficiently to perceive it.

Figure (3) depicts Quantumland on the left, the collapse of the wave function, and the resultant objects in everyday spacetime on the right. This depiction is a gross simplification because the collapse from wave to particle does not occur at the scale of entire objects like homes and picnicking families. Instead electrons, quarks, and other quantum particles are continually moving from their wavy states, interacting with others, and collapsing to particles. When they collapse, the entire atom and molecule collapses with them. Then, quantum particles revert to their wavy state, collapse again, and on and on. So, at any one moment, many of the atoms and molecules of an object are in their wavy state and many are collapsed down to particles.

This brings us to the final part of the accompanying video, “Add an Observer.” This part of the video shows the electron wave approaching the barrier. But this time, there’s a detector at the barrier watching which slit the electron goes through. This could be a human with Superman vision or a Geiger counter or another device. The device interacts with the electron sufficiently to determine which slit, so the electron collapses down to a particle and goes through only one slit.

Once past the barrier, the electron, freed from interaction, reverts to its wavy state. Upon interaction with the detection screen, it again collapses down to a particle and lands as a tiny localized dot. Again, the video incorrectly shows that after repeated runs of the experiment, random dots cover the detection screen with no particular pattern. Experimental results show that the resulting pattern on the detection screen is, instead, two clumps as shown in Figure (1).

In summary, the electron is definitely a particle when it hits the detection screen. And at other times, it’s a wave. But it’s not a physical wave like a water wave or sound wave. It’s a wave that follows the laws of quantum mechanics.

Quantum physicists are in a situation similar to chemists before atoms could be observed with powerful microscopes. (See this article for information on our current ability to observe atoms.) Chemists predicted the results of their experiments on the assumption that atoms exist. They used atomic behavior in their calculations very successfully. Yet, for a century, from the 1800’s into the 1900’s, they had no hope of observing atoms. Some might have said that even, in principle, observation would be impossible. Similarly, many quantum physicists describe the state of quantum particles prior to detection as a superposition because doing so helps them to understand what is going on. They probably have even less hope of detecting a superposition than did chemists regarding observing an atom.

However, interestingly, I just ran across this article on a proposed 2018 experiment that may help them take a peek into the world of the superposition.

Alternatives to the Superposition Idea

The Superposition Idea Is Workable

The superposition idea, whether it will survive in the long run, is useful. Take the example of a photon of sunlight in photosynthesis. Plants are able to use the red photons from the sun. Red photons zip through the cells of a leaf to the “reaction center” where they provide the energy for photosynthesis, that is, the production of sugars.

The trouble is that, once absorbed by a molecule of chlorophyll, the photon must find its way through a maze of cells to find the reaction center, where it will contribute its energy. If the photon used the ordinary strategy of wandering through the maze, its energy would be lost long before it reached the reaction center. But, in fact, biologists have found that plants are able to use almost every red photon for sugar production. How?

Quantum equations to the rescue! Scientists can use quantum equations to describe what the photon actually does, which is different from wandering through a maze of cells. But what is the photon actually doing physically? The Copenhagen Interpretation is that while in a superposition, the photon is experiencing a superposition of all paths. (Richard Feynman would say that it is traveling all possible paths.) Then, it enters physical reality having selected the fastest path. Here is a 4-minute video describing this:

And here is an academic paper which gives a more technical description: Quantum mechanics explains efficiency of photosynthesis